“A Waugh-like gaze at the career of a contemporary journalist as he swings among the gingko trees of D.C., thin lips down turned in an upside-down happy-face smile, always, hilariously, getting it wrong.”

--Gore Vidal
“Some Washington novels are teasing love letters, poking fun at the city's culture while quietly endorsing its values. This one is a rude punch in the gut. It makes the capital look like one of the deeper circles of hell, a place ruled almost exclusively by vanity, backstabbing and lust...The book's greatest triumph is its narrator's voice: a brilliantly odious blend of cliché, double talk and name-dropping...The book's humor comes from the gap between everything this insufferable narrator says and the reality that peeks through when he quotes other people--an irony so wounding that the novel feels more like an 18th-century satire than the work of recent comic writers like Tom Wolfe. Even the names carry a Swiftian spank...”
--The New York Times Book Review
"Jeffrey Frank doesn't merely enjoy showing the seamy side of Washington; he revels in it. Set in the 1960s, The Columnist is a dazzling hat trick: a parody of the Washington novel, the Washington memoir, and Washingtonians in general."
--Jacob Heilbrunn, National Review
“Take it from somebody who spent four years (plus a second edition) trying to pierce the heart of darkness that beats beneath the Washington punditocracy: there are some truths buried so deep beneath layers of self-protective blubber and blabber that no amount of journalistic excavation can unearth them. That's why God invented the novel...Jeffrey Frank's astonishingly self-assured fiction packs a curiously subtle wallop. Where Frank's talents as novelist take us into new territory is allowing us a peek at the psychic costs these clowns pay for playing someone they would like us to think they are 24/7 while knowing full well inside themselves that they cannot measure up...”
--Eric Alterman, Columbia Journalism Review
"A scathing satire of a Washington pundit who is all opinion and no insight, all contention and no content...The Columnist is one of the sharpest skewerings of a journalist since Evelyn Waugh's Scoop.”
--Heller McCaplpin, The San Francisco Chronicle
"[Brandon Sladder, the protagonist, is] a kind of maleficent Candide, who blackmails, lies, betrays, cheats, fucks, namedrops, marries and blunders his way to the top--and assumes no one will notice. This rare combination of megalomania and naïveté vaults The Columnist right out of the Washington-book genre, so that the capital winds up as little more than the setting for a spectacularly realized English-style humor novel...Washingtonians know a Brandon Sladder (or a dozen) and will recognize the crud-rises-to-the-top world he inhabits. Mr. Frank includes enough detail to show he knows this world cold...But The Columnist is not really a Washington novel. Sladder’s hypocrisy is a matter of generic human vanity, not of ideology. His politics are vaguely conservative, but basic doltishness, rather than opportunistic inconsistency, is their great failing--as when he urges a politician friend to present himself to poorer constituents as ‘an ambassador from the nation of learning.’ This is not really even an American novel so much as a Victorian satire. Its humor--like that of Jerome K. Jerome’s Three Men in a Boat (1889) or George and Weedon Grossmith’s Diary of a Nobody (1892)--lies in tone and misdirection. Mr. Frank doesn’t strain to be 'major.' He makes no clumsy attempts to sneak big truths in through the back door. And he has managed a feat that few besides Kingsley Amis have pulled off in recent decades: He has written an extremely funny book around a character who is, down to the very pith of his being, a bore.”
--Christopher Caldwell, The New York Observer
"[The author] created a character that deserves to jump outside the Beltway and enter the language like 'Uncle Tom,' 'Peter Pan,' or 'Scrooge.' From now on, any ambitious windbag might hear the murmur in his wake: 'There goes a real Sladder.'"
--Ron Charles, The Christian Science Monitor
"A novelist's only rational response to Washington, D.C., is satire. Not lame Primary Colors stuff, with wimpy stick figures standing in for the Clintons, but nasty, down-and-dirty, rip-their-pompous-heads-off satire that hurts like the truth. Meet Brandon Sladder...It's long been true that novels about contemporary Washington are almost impossible to write. The most imaginative fiction writer can't hope to match what goes on inside the Beltway. The truth is just too weird, so the only rational approach may be to do what Frank did and take the truth, twist it a quarter-turn to the side, and cook up a satire...Through it all, the scarily accurate sendup of 'the McLaughlin Group' and Sladder's downfall and resurrection through the wonders of cable TV, Frank never lets up. It's even possible to feel some sympathy for Sladder, in the way Americans accept a public figure who's been disgraced and still refuses to leave. It's the way Washington works, and if the hero of The Columnist understands nothing else, he understands that.”
--Jeff Baker, The Oregonian 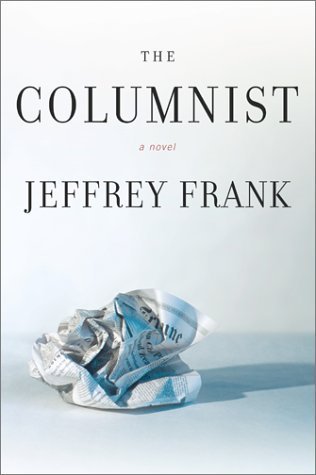