"Move over, Tom Wolfe. Jeffrey Frank is here to stay.

"From the author of the critically acclaimed 2001 novel The Columnist comesBad Publicity, a quick-witted satire about what it takes to succeed, and survive, in Washington, D.C.

"Frank cleverly portrays what unfolds when men and
women aspire to be successful, powerful and popular in a city that expects all
of the above.

"The backbone of this dark-humored novel is Frank's creatively flawed set of characters. A dream team of naughty bigwigs and unbalanced power seekers.
Each oddball adds a punch of energy and pizazz to an otherwise simple plot.

"Frank pushes it a step further by introducing each character into the others'lives, creating a successful six degrees of separation formula that will keep
the reader chomping at the bit."

--Nicholas Thomas, USA Today
"To describe this novel as darkly comic would be inadequate; it's funny, all right, but its vision isn't merely dark--it is so bleak as to be almost Hobbesian. Satirists traditionally take a dim view of humanity, and Frank is gleefully, unapologetically in that mordant tradition.

"Frank...certainly knows his Washington. He understands it is a city where the restless ambitions of its citizens are almost palpable, and he understands what distinguishes Washington from most other cities: since politics is the only game in town, everyone knows with altogether too much precision his or her position in the social hierarchy...He understands the pathetic quadrille of deeply dull people seeking reflected glamour through their connection to other deeply dull people who happen to exercise power.

"...Frank has painted an entertaining and very knowing portrait of Washington. Should this year's election produce a new administration, its incoming members would be well advised to read Bad Publicity before they relocate.
--Eric Tarloff, The New York Times Book Review

"If I had to compare Bad Publicity to anything, it would be as the offspring of some unholy union between Anthony Trollope and Nathanael West.Bad Publicity is Frank’s Day of the Locust, except it's more amusing than pathetic--all the fierce squabbles over the deep meaning of a Dukakis presidency gives every action a delicious patina of retroactive absurdity.”

“Frank's prose is as clear and cold as a well-iced Martini, and lets the characters skewer themselves, from sad-sack Dingleman and his baleful nemesis to an overtanned P.R. agent who proudly wears her company's logo-two teeth biting into the globe-and a liberal welfare expert who rolls up the car windows when he drives through blighted neighborhoods. The satire slyly exposes a Beltway world of has-beens and never-wases, where hopefuls scrabble for attention at cocktail parties and a unreturned phone call is a death knell.”

"Frank's writing is wry and incisive; none of the characters escapes his scathing assessment. Each one is a schemer whose instincts (self-protection, self-aggrandizement) militate against genuine career progress and (perhaps more to the point) personal happiness. …

"Frank's characters exploit one another, sleep passionlessly with one another, fantasize about liaisons with one another and come to realize that the brass ring is passing them by. Though certain they're destined for fame and fortune, they watch as their second and third chances ebb away. This is what it's like to become a nobody in a world of somebodies, the novel tells us. This is what it's like to be washed out. Though the human weaknesses Frank limns apply just as often to those of us outside D.C., Bad Publicity will make us happy, especially as this election year gains steam, to be living elsewhere."

Mr. Frank's many years in Washington give his characters a ring of authenticity, especially for those "in the game." This is a novel about masters of the game and their sycophants, a witty take on the political food chain. He mercilessly skewers their ambitions, but manages to do so without a noticeably partisan blade….. Mr. Frank's brisk prose depicts a rich humanity (if on the dark side), where a lesser writer would lapse into one-dimensionality and cliche.

“First, Frank penned 2001's The Columnist, a satiric glimpse into the personal musings of a solipsistic Washington scribe. Now comes i>Bad Publicity, a sparkling, fast-paced novel…which explores the knotty question of how, as one character muses, ‘lives [go] awry in Washington.’…

“The argus-eyed Frank, a native Washingtonian who has worked for the now-defunct Washington Star, Congressional Quarterly and The Washington Post, is adept at capturing what is sometimes viewed as the pompous preening and fatuous banter of the "web of intersecting people, few wishing each other well" that constitutes the capital's establishment.”

“…as a novelist Frank has developed formidable technical skill. His prose is spare and vivid, with scarcely a wasted syllable; every sentence has a pop to it. ("Although no one could remember what she'd ever said," he writes of one TV talk show regular "no one could remember her ever being without something to say.") The gears of his plot engage with a well-honed click. And he's quite good at atmospherics, especially in evoking the Washington of Late Reaganism: the buzz in the streets when Mikhail Gorbachev made his state visit in Dec. '87, the long-forgotten flutters provoked by Iran-contra and especially, the bloom of young love that greeted Michael Dukakis in Democratic circles in those carefree months when it looked as if he might at last restore the White House to its rightful owners.”

“Bad Publicity is for anyone interested in politics or simply good wordsmithery, at which Frank is masterful.”

“Having tested his satiric mettle with The Columnist, Frank now successfully skewers the Washington milieu in which the denizens of think tanks, law firms, PR agencies, and other putative movers and shakers compete for a leg up, or at least a kind smile. Among them is Charlie Dingleman, an ex-Congressman angling for a job in the 1987 White House. Charlie's raucous nightmare begins after a lame joke told to a young lawyer goes awry. He enlists Big Tooth-a PR firm whose logo is two teeth gripping the planet Earth-to help counter the rumors arising from his gaffe. But once an unfortunate episode of public urination compounds his original misstep, poor Charlie is history. All along, Frank… makes frightening points about the toxic side effects of political life in the nation's capital. Released in an election year, this satiric tour de force should enliven collections of political fiction in large public libraries.”

"[W]ith this and his first novel, The Columnist, Frank has established himself as one of our top satirists of Washington, which comes across like a nest of exceedingly well-mannered vipers. No wonder that at the end of the novel, when one of Frank's characters gets fired, her reaction is one of sheer "Free at last!" glee. "She imagined how it would feel to do something else, almost anything else, and for that moment felt as if she were aloft, floating all the way to Minnesota."
---The [Madison] Capital Times

“Cast your mind back to 1987. A presidential election is in the offing. It is before the time of the Internet, before political correctness, before "sex scandal" and "president of the United States" were phrases bandied about in the same sentence. Throw into that time Charlie, a disgruntled former congressman in line for a top White House post; Judith, his easily offended colleague, who interprets Charlie's lack of verbal etiquette as evidence of a sexual "problem"; Hank, Judith's would-be lover, a man whose tenuous connections to a prominent news anchor represent Judith's means of warning the public about Charlie; and Candy, the professional spin doctor hired by Charlie to defuse the public-relations bomb that's about to explode. This motley crew is about to find out, once and for all, whether the old cliche--there is no bad publicity--is really true. The novel is broad satire in the Christopher Buckley vein, with a loopy story line featuring plenty of misunderstandings and near misses. Desperate people behaving desperately--in other words, a whole lot of fun.”

"The Columnist was a very funny "autobiography" of an opportunistic Washington columnist; his latest, Bad Publicity, mocks the capital's everlasting
brown-nosing and backstabbing through the misadventures of a loosely interwoven
cast of characters in desperate search of preferment, fame, or, if all else fails, notoriety."

--Brooke Allen,The Weekly Standard
"Just in time for Election Year, a wickedly funny account of the aimless lives of Beltway losers caught up in the events leading up to the 1988 Dukakis-Bush slugfest. ... What brings this ship of fools to unforgettable life is Frank's heartlessly deadpan way of deflating their most cherished desires, from their petty scrabbling for 15 minutes of fame to their hilariously untitillating couplings (as when Judith reflects tolerantly of an unappealing suitor that "she expended fewer calories on him than she would merely climbing onto her exercise machine"). … the delight Frank (The Columnist, 2001) takes in skewering his crafty nincompoops is infectious, evergreen." 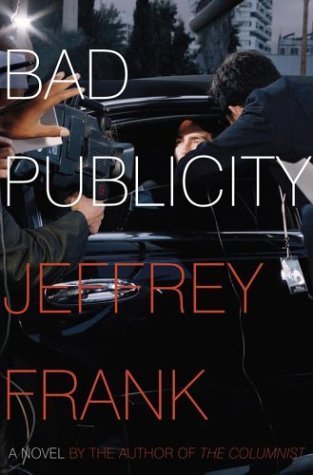