The Stories of Hans Christian Andersen: A New Translation from the Danish

“This is the real Andersen, restored to life, in the flavor of Danish. He was a perpetual traveler and guest who left behind only this work, and here at last you will find him.”

--Garrison Keillor
“Hans Christian Andersen, in aesthetic eminence, is comparable to Dickens and the later Tolstoy. In the cultural dumbing-down represented by the Harry Potter phenomenon, adults and children alike need the actual Andersen, here made brilliantly available by the Franks.”
----Harold Bloom, editor of Stories and Poems for Extremely Intelligent Children of All Ages


[The Franks’] collection of 22 major stories, including a biographical introduction and notes, is based on impeccable and careful research into his style and thought. The result is a superb book of Andersen's tales, lively to read and true to the originals. Indeed, it will be difficult for other commemorative editions to match this publication.”
--Jack Zipes, the director of the Center for German and European Studies at the University of Minnesota, in the Minneapolis Star Tribune
“[The Franks] have stripped away the florid Victorianisms of the previous translations. They have also widened the scope of Andersen’s oeuvre by including in their selection some little-known stories, like the psychoanalytically tinged parable, ‘The Shadow,’… as well as the strikingly modernist ‘Auntie Toothache,’ and the mystical elegy, ‘By the Outermost Sea’—which the American abolitionist John Brown is said to have read on the eve of his hanging…[the translation] pays careful attention to Andersen’s warm and, above all, insouciant storytelling style…"
--Heather Caldwell, Book Forum.
"He was a great writer --one of the greatest ever to have written for children. The Stories of Hans Christian Andersen proves the point beyond question, in a large, handsome volume of 22 tales, with original 19th-century illustrations and decorations. Here are the old favorites, as well as tales less well known. The translators provide useful footnotes, and a fine biographical introduction...

"Most important, the new translation by Diana Crone Frank and Jeffrey Frank is certainly our best English version yet. It is distinctly less Germanic and more Scandinavian than its predecessors, lighter, more buoyant, conveying the energy and freshness of this most peculiar author...

"Each tale contains an instant springing to life, rendering the comic moment heartbreaking, and the tragic triumphant. story while keeping it secret. ...
[The collection] gives us Andersen pure and clear. "
--Liz Rosenberg,Boston Globe
“…Andersen is almost never thought of as a literary artist, like his contemporaries Dickens, Dostoyevsky, and Flaubert. He is usually grouped instead with the Brothers Grimm, who did not invent their folk tales but recorded them; or else he is reduced to a cliché, a kindly uncle surrounded by tots, as in the classic movie with Danny Kaye.

But a new edition of Andersen's most famous tales, translated by Diana Crone Frank and Jeffrey Frank, means to change all that. The Franks declare their intention to treat Andersen as he is treated in his native Denmark: as a sophisticated modern writer, to be read and studied as seriously as his fellow Copenhagener, and one-time reviewer, Søren Kierkegaard. They translate Andersen's Danish into idiomatic contemporary English, capturing his deliberate colloquialism. More strikingly, they provide each of the 22 stories with footnotes, demonstrating their roots in Andersen's own life.”
--Adam Kirsch, Slate

"This beautiful and useful volume combines new translations of the canonical stories with some of the original illustrations. The introduction and annotations are clear and helpful for older children or adults."
--The New York Times

There is also a delightfully anarchic, antiauthoritarian streak in his fairy tales. In "The Emperor's New Clothes," it is the little child who sees through all the pretension of the court. And one finds the peculiar droll logic that is also present in Lewis Carroll. His use of language is extremely vivid, and he makes the otherwise rather harsh Danish language sound like music. He has a subtle and immediately recognizable tone of voice which the current translators have been very apt in catching. And that is no small achievement. What they are handling here are lines that are etched in the minds of every Dane. The slightest misstep, the merest attempt at taking liberties would cause instant derision.

”The classic stories…crackle with resuscitated life, thanks to the translators' faithfulness to Andersen's fresh, colloquial Danish. There's also an illuminating introduction, "The Real H.C. Andersen," which reveals the writer as much more than ‘a quaint nineteenth-century writer of charming children's stories.’”

"...the real value of this edition lies in the accurate new translation by Diana Crone Frank and Jeffrey Frank. This is an exceptionally handsome book, well worth seeking out."

This new collection--returning faithfully to the original Danish--takes Andersen out of nursery and places him squarely in the literary pantheon.

While Hans Christian Andersen's tales continue to seize the imagination with their singular blend of simplicity, eccentricity, and charm, readers have had to content themselves with inaccurate retellings and inadequate translations. Now Diana Crone Frank, a Danish novelist and linguist, and Jeffrey Frank, a novelist and editor at The New Yorker, offer a much-needed modern translation, brought out by Andersen's original American publisher.

In this collection are twenty-two tales that best represent Andersen's literary legacy. Here are the classics: "The Little Mermaid," "The Ugly Duckling," "Thumbelisa," and "The Princess on the Pea" among them, as well as largely unfamiliar stories like "By the Outermost Sea." Illuminating notes clarify references in the stories. And in an extended introductory essay, the Franks explore the writer and his times, placing the enigmatic and often bizarre figure of Andersen among his literary contemporaries, such as Charles Dickens and Søren Kierkegaard, with whom he crossed paths.

The book is illustrated with the delicate and beautiful drawings by Vilhelm Pedersen and Lorenz Frølich that accompanied the original Danish publication. 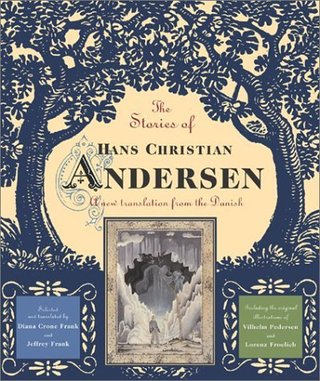